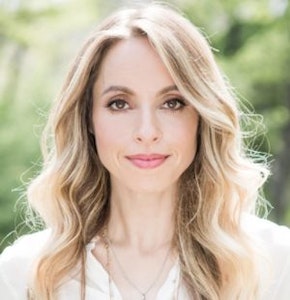 Gabrielle Bernstein has been named “a next-generation thought leader” by Oprah Winfrey. She appears regularly as an expert on The Dr. Oz Show and has been named “a new role model” by The New York Times. She is the New York Times bestselling author of Miracles Now, and May Cause Miracles. Her two additional bestsellers include of Add More ~ing to Your Life and Spirit Junkie. Gabrielle is also the founder of HerFuture.com, a social networking site for women to inspire, empower and connect.

Gabrielle has been on an international speaking circuit since 2004. She has presented lectures at Google, TEDxWomen, Philosophy, The Chopra Center, The Omega Institute, L’Oreal, mark/Avon, The United Nations, The Huffington Post, among many other notable organizations.

Gabrielle is a certified Kundalini yoga and meditation teacher. She is also trained in the Emotional Freedom Technique and she’s a student of Transcendental Meditation (as taught by the David Lynch Foundation).

Gabrielle is a regular guest on the Dr. Oz Show and has contributed to or been featured in media outlets such as Oprah’s Super Soul Sunday, NBC’s Today show, Anderson Live, CNN, Fox & Friends, PBS, The Bethenny show, The Queen Latifah Show, Kathy Lee and Hoda, Access Hollywood, OWN’s Help Desk, The New York Times Sunday Styles section, ELLE, Marie Claire, Health, SELF, Women’s Health, Glamor, The Sunday Times UK, US Weekly, People, Wall Street Journal, Sirius Satellite Radio, and many more. Gabrielle has also been on the covers of Experience Life and Self-Made magazines; in the latter, she was named one of the top 50 women in business. Gabrielle has a bi-monthly column, Zen in the City, featured in Metro newspapers nationwide. Get her full press kit here.

Gabrielle is on the steering committee for Philosophy’s Hope and Grace Initiative, she is a member of the advisory board for New York University’s Of Many Institute for Multifaith Leadership and Feminist.com’s “Our Inner Lives” religion and spirituality project.

The Buzz about Gabrielle Bernstein:
“I came to one of Bernstein’s monthly lectures and got my first look at the woman I’d one day unabashedly refer to as “my guru.” —ELLE Magazine

“A decade ago, young women like Ms. Bernstein might have been expected to chase the lifestyle of high heels and pink drinks…But now there is a new role model for New York’s former Carrie Bradshaws…well versed in self-help and New Age spirituality…Ms. Bernstein is one of a circle of such figures, influenced less by the oeuvre of Candace Bushnell than that of Marianne Williamson.”
—The New York Times

“Forget what you thought you knew about ‘self help’. Life coach Gabrielle Bernstein has wowed the US – and now she’s hit the UK to unleash a happy new you!” Glamour UK